Bring Unique Intensity Love and Determination to everything we do

We will not be ashamed of being Christian Athletes (Romans 1:16) 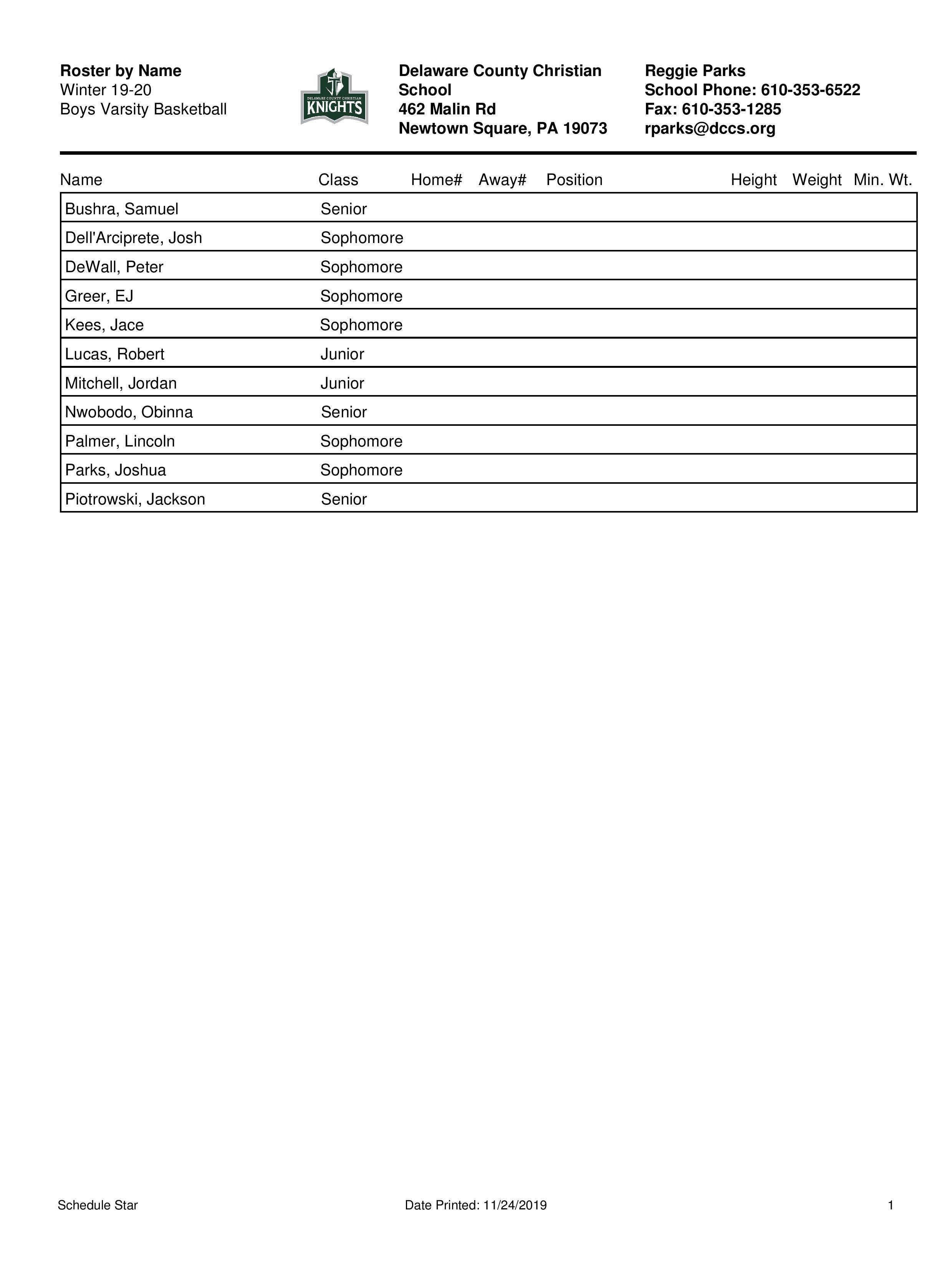 Coach Parks heads into his second year leading the Knights after having a successful campaign in 2018-19, Last year, the team finished with a 17-11 overall record, a District 1 2A title and advancement to the second round of the PIAA playoffs. Coach Parks has been associated with the DC basketball program since his family’s arrival at DC in 2003, when he began coaching / training players as a DC parent volunteer in the Malvern League.

For the past 15+ years, Coach Parks has dedicated much of his time to youth basketball development, leading DC’s Jr Knights Basketball program since 2007 and running his Hoops2Life AAU Basketball organization since 2012.

Coach Parks believes that the Lord has gifted each and every person with talents, all of which should be dedicated back to God for His ultimate glory. He believes that athletics is an opportunity to praise the Lord through how hard you compete and by showing great character while doing so. Basketball can teach such important life lessons through the game that can be leveraged for a lifetime. Hard work, overcoming adversity, setting and achieving goals with others and becoming a servant-leader are all attributes that can be well learned through sports.

Coach Parks played Varsity basketball at Cedar Grove Christian Academy, where he averaged double digits in scoring and rebounding the last two years of his high school career. Coach Parks attended Temple University where he developed a love for coaching through closely observing the style and life impact of Coach John Chaney, Temple's head coach during that time period.

As a DC "lifer," Coach Hummel attended DC from K-12. He enjoyed many activities during his tenure, including basketball, baseball, journalism, drama, NHS, student senate, and impersonating teachers (smile). Coach Hummel attended college at West Chester University, where he received his B.S.Ed. Since graduating in 2013, he has worked in Coatesville, West Chester, and Marple Newtown teaching both middle school Mathematics and Social Studies before joining the DC faculty in 2015. Coach Hummel is currently the History Department Chair at DC.

Coach Hummel has been a coach at DC since arriving in 2015 and has a wealth of basketball knowledge and a passion for the game. He is a gifted communicator with an ability to connect with his players and also is a tactical thinker providing valuable program support in pre-planning and gametime adjustments.

Coach Lyren is in his second year as both Boys MS Head Coach and Varsity Assistant. Coach Lyren played high school basketball at Wadsworth HS in Northeast Ohio. There he scored over 1,000 points and was All-Ohio Honorable Mention. Coach Lyren played college basketball for Fran Duphy at the University of Pennsylvania from 1993 - 1997. At Penn, Coach Lyren won three Ivy League titles, was captain of the 1997 team and played in two NCAA Tournaments.

Coach Lyren focuses intently on fundamentals and plays a key role in ensuring DC’s players play the right way, with high character and effort at all times. He brings a wealth of basketball knowledge and a passion to see the boys compete and excel at the highest level possible.

Coach Lyren and his wife Melanie have two boys at DC (Beau and Josie), both who are active, multi-sport athletes.