DC Football founders Gary Davis and Jim Favino had a vision to use the game of football to mentor young men. Their vision included teaching integrity, leadership, adversity and values. Today, Coach Lloyd Hill leads the program and is deeply driven to continue the vision God placed on the hearts of those who laid the foundation for the DC football program. Billy Graham once said, “A coach will impact more people in one year than the average person will in an entire lifetime.". Coach Hill finds these words to be true to his calling to coach. He says, "I don’t coach for the fame or praises from the world. I know the championships, rewards, and rings will collect dust and be forgotten. I coach because it is a passion for me to see all of my athletes succeed on the field as well as off the field. Just like the coaches I had in my life were determined to see me succeed. I define success as when an athlete has done their absolute best to achieve their goal. Using this game is such a great tool to teach life lessons to our young men."

Team Theme
The young men in this program are expected to be courteous, respectful and responsible at all times. In addition to the rules established by Delaware County Christian School, our football athletes will focus on the S.O.U.L. of the team. Selflessness - putting individual needs aside for the good of the team. Ownership - fulfilling your role by learning it thoroughly and by consistently giving 100%. Unity - understanding and rallying around your team’s mission and culture through open communication and positive conflict resolution. Larger Purpose - contributing to a wider community in a lasting and significant way.

Our team verse for the year is Daniel 12:3 Those who have insight will shine brightly like the brightness of the expanse of heaven, and those who lead the many to righteousness, like the stars forever and ever. 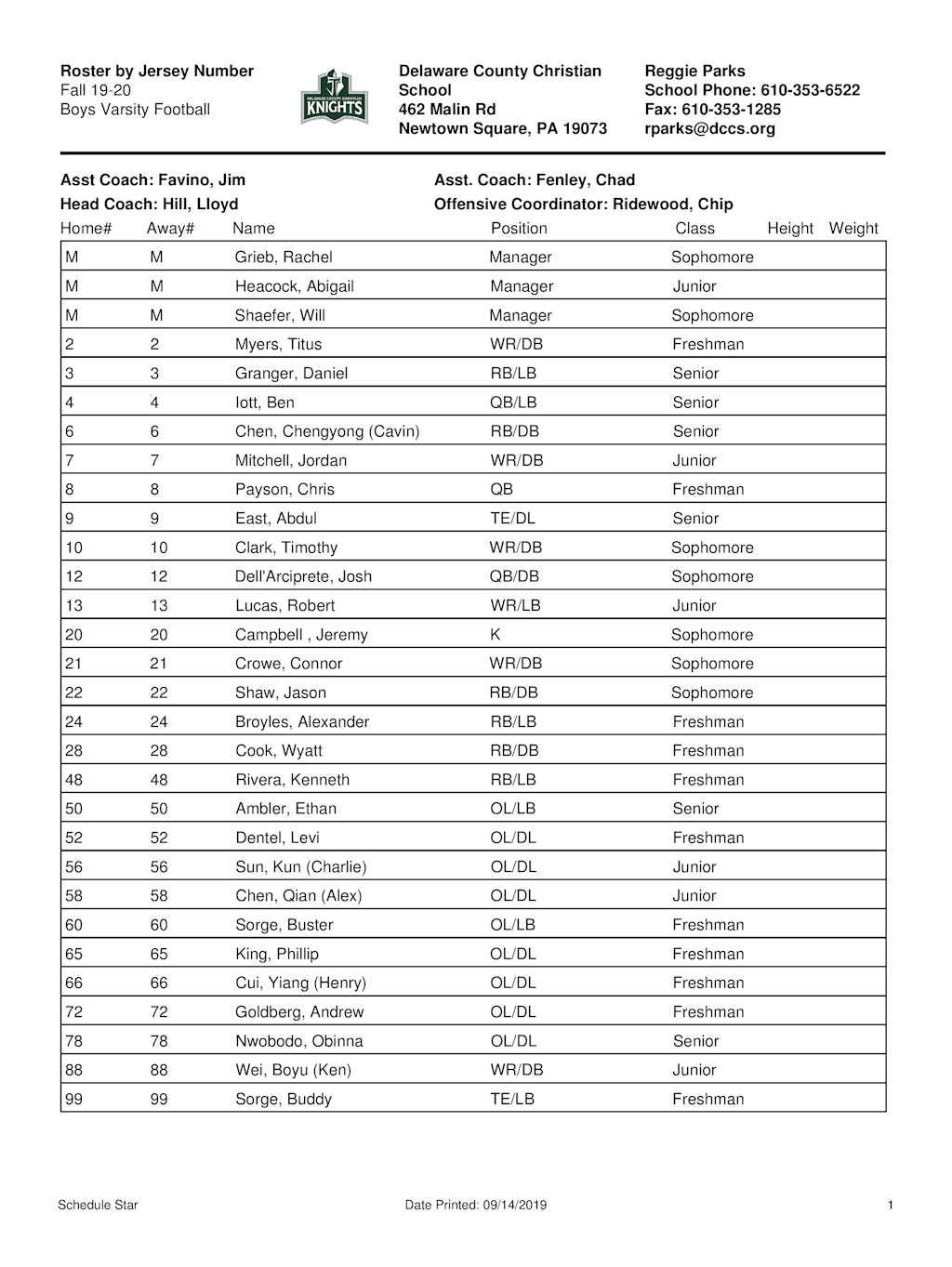 Coach Hill grew up in Miami, Florida and developed a commitment to his sports after he lost his parents as a boy. He appreciated the no-nonsense approach of Coach Frazier, his HS football coach at Miami Carol City High School. Coach Hill learned from Coach Frazier how much it means to kids when you coach with a tough, yet caring approach. This was reinforced to Coach Hill as he went on to compete for Widener University in both football and track. His football coach, Bill Zwaan and his track coach, Vince Touey offered him support and encouragement while he was there.

Coach Hill is a beloved coach here at DC in both football and track. He has a unique gift to encourage athletes to give their very best and he always makes the athletes feel valued and cared for. He has coached at Widener University, Chester Charter School, Roman Catholic HS and Devon Prep. Coach Hill is a faculty member in the middle school at DC.

Coach Ridewood played high school Football at Interboro High School from 2001-2003 (2001/2002/2003 Del-Val Champs; 2002/2003 PIAA AAAA District One Finalists). He was honored as a 1st Team All Del Val, Honorable Mention All Delco Offensive Lineman for the 2003 Season, and was named a National Football Foundation Philadelphia Chapter Scholar-Athlete. Coach Ridewood played college football at Widener University from 2004-2007 (2005/2006 ECAC Bowl Champions; 2007 Middle Atlantic Conference Champions). He was named to the Middle Atlantic Conference Academic Honor Roll in 2006 & 2007 and was voted by his teammates as the winner of the Joe D'Angelo Jr. Memorial Award for the "Player Who Loves to Practice and Has Integrity Without Compromise." Before coming to DC, Coach Ridewood was the Offensive Line Coach at Interboro High School from 2008-2014 (2008/2009 Del-Val Champions; 2009 PIAA AAA District One Finalists; 2012 PIAA AAA District One Champions).

The thing Coach Ridewood enjoys most about coaching at DC is being able to work alongside Godly men and role models like Chad Fenley, Lloyd Hill, and Jim Favino. He also loves coaching players who compete hard and leave it all on the field, knowing that they are supposed to do all they do for the glory of God. Coach Ridewood is a faculty member in the middle school at DC.

Coach Chad Fenley played high school football at Alamo Height High School in San Antonio, Texas from 1997-2000. Coach Fenley was a three-year varsity letter winner and two-year starter. He was his team’s Offensive MVP and voted First Team All-District Wide Receiver his senior year. Coach Fenley also played in the San Antonio High School Football All-Star Game. He continued his playing career at Wheaton College from 2001-2004 and during his time there, he played on 3 CCIW Championship teams that made it to the NCAA Division 3 playoffs. Coach Fenley returned kicks and played wide receiver.

Coach Fenley learned much about life through playing football including discipline, character, integrity, teamwork and selflessness. He considers it is a privilege coaching and working with young men trying to instill and develop many of the character qualities that he himself learned through the game. Coach Fenley's coaches made major impacts in his life and he feels it is his calling to give back in the same way. He considers it a blessing to coach at DC. It is evident that he desires to see DC athletes, when they finish playing football, be different than when they started in the program. Coach Fenley is also faculty member is the middle school at DC.